How Micro SaaS is different from VC-backed SaaS 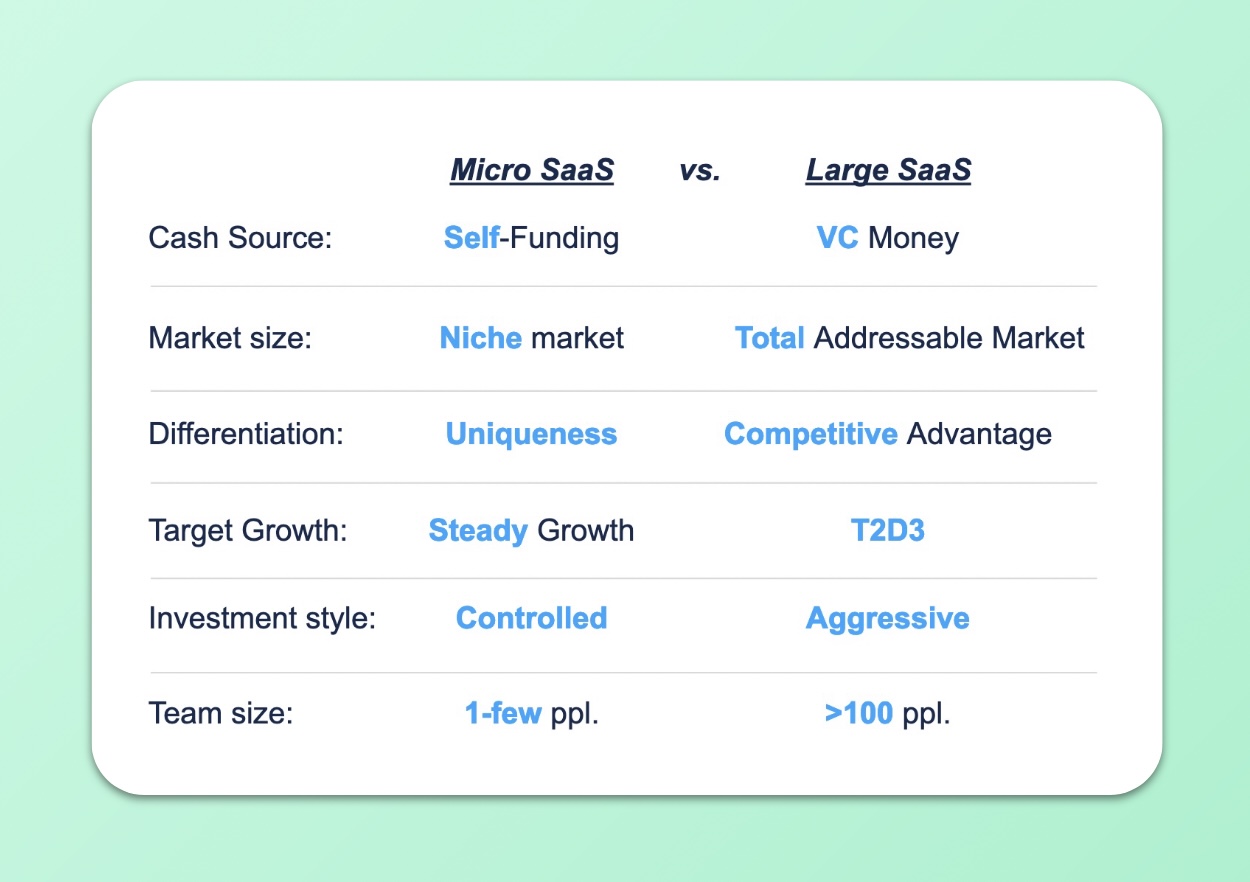 I assume visitors on this page may already have some understanding of what Micro SaaS is. As you know, the term Micro SaaS was recently defined by Tyler Tringas of storemapper. The definition is as follows.

A SaaS business targeting a niche market, run by one person or a small team, with small costs, a narrow focus, a small but dedicated user base, and no outside funding.

If we compare these characteristics with normal SaaS( I call them Large SaaS), the followings are the key financial aspects you should keep in mind to running your own Micro SaaS.

Most famous SaaS players ex. Slack, Wayflyer, Dropbox, etc. are backed by VC money. Generally, they’d like to make another tech platform and their primary focus is to win the highest share in an emerging huge market and seek a high valuation. To do so, they need to hire great talent quickly, develop/improve the product as fast as possible and become prominent in the industry so that they ultimately engage majority of the users, clients, and companies to build a network effect which requires a massive upfront investment that is merely covered by self-fund.

Note: Almost all of the unicorns in the EU are backed by VC money. 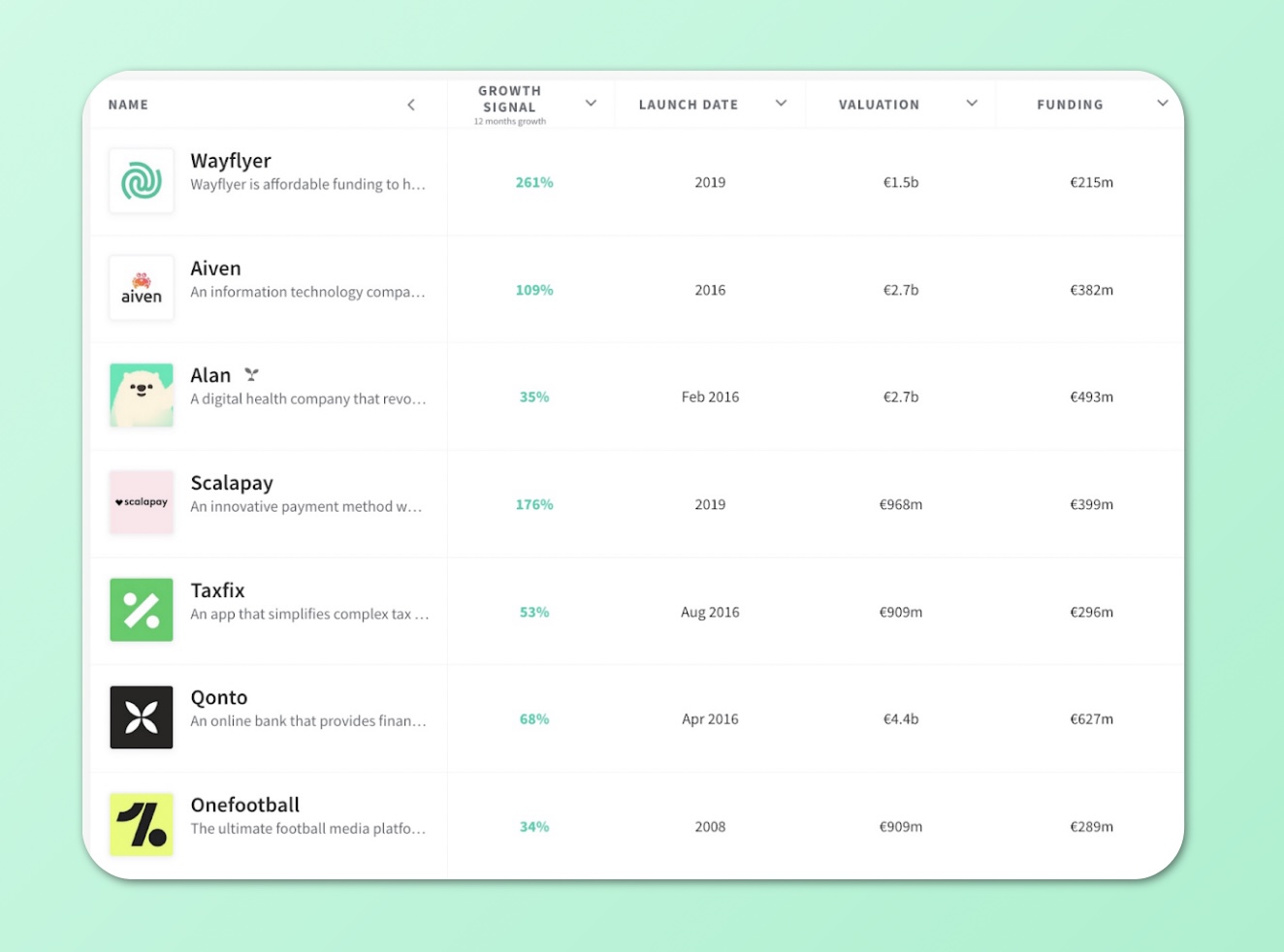 On the contrary, Micro SaaS is neutral about its presence in a huge market. It’s enough for them to get a decent share in the unique market they are targeting. There is no reason to make a large upfront investment. Gaining a high valuation and becoming a millionaire is not a priority for most Micro SaaS funders. They just invest money to the extent that they can bear as a regular cost. Thus, they don’t need to raise funds from outside.

If you run a Large SaaS company, the targeted market size matters a lot. From an investor's standpoint, TAM (total addressable market) is one of the most critical factors to decide on the investment and valuation of the startup as they can’t expect long-term growth from the business if the TAM is small. Therefore, Large SaaS companies insist on the vastness of the market they are in. 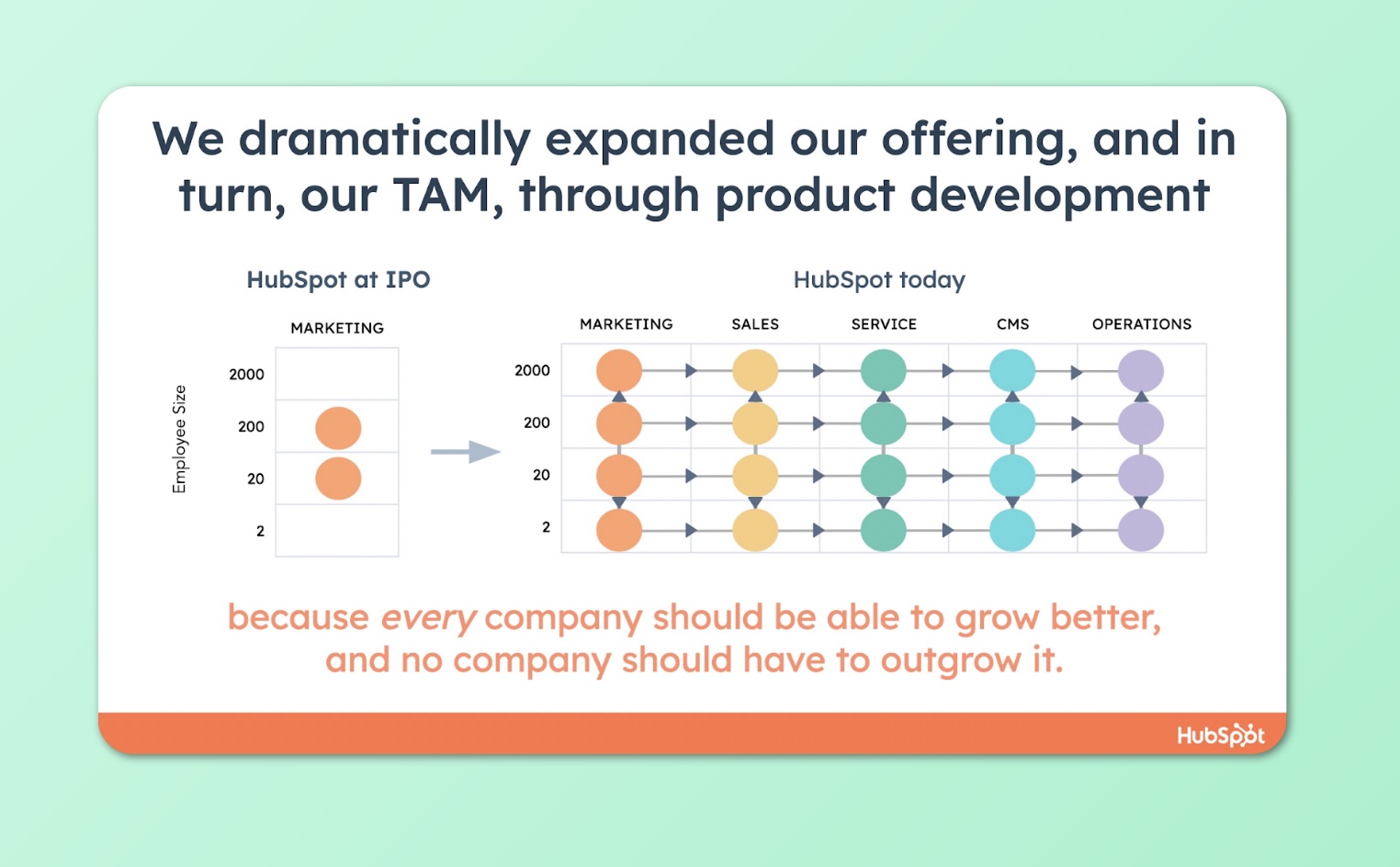 On the other hand, as you can find in Tyler’s definition, the target market of Micro SaaS is niche. Micro SaaS doesn’t need to claim the size of the market. They just need to prove how unique the market is compared to that of Large SaaS.

The bigger the market, the more competition. That’s why Large SaaS invests aggressively and seeks as high growth as possible. T2D3 is a well-known goal for Large SaaS companies, which requires tripling your annual revenue for two years in a row and doubling it three more years after that.

On the contrary, Micro SaaS doesn’t set a high growth goal generally. They don’t prioritize the competition, either. The way they secure their share is not by winning the competition but by uniquely defining the market to avoid competition. Therefore, growth speed doesn’t matter a lot for Micro SaaS but the uniqueness and the quality of the product do. If your product is worse than Large SaaS even in the specific niche market, no one uses the product of Micro SaaS.

Because of the difference in the target growth rate, investing behaviours vary among the two SaaS types. Large SaaS invests really aggressively. They plan and manage costs/profits, but the most important thing for them is gaining traction and achieving hyper-growth. As long as the topline grows at a good speed, they don’t mind bearing a huge loss. It can be covered by the money raised from VC.

Micro SaaS cares about costs and profits more seriously. For most Micro SaaS founders, the business should be run under the money on hand. They tightly control the costs and rarely generate a loss. Even when they see a loss from the SaaS business, the loss is being covered by the profit from other businesses such as freelancing, consulting, etc.

As a result of the investing behavior above, #employees of Large SaaS grow much faster than that of Micro SaaS. Large SaaS hires many tech FTE talents like engineers, product managers, and tech sales while Micro SaaS merely hires full-time employees. Even when the founder needs the capability from outside, they tend to hire a freelancer or part-time worker in order to keep its fixed cost as low as possible. That’s why Micro SaaS is run by just a few people generally.

Which type is your SaaS?

To me, the differences above are clear. However, I know lots of founders who like the Micro SaaS way but consider funding from Venture Capital. If you are in the same situation, it’s worthwhile asking yourself if your company is on the Large SaaS or Micro SaaS way.

I believe Micro SaaS is one of the most powerful business models if you prioritize your life and should be managed differently from Large SaaS because of the essential difference. My future posts include how you should and shouldn’t manage your Micro SaaS (financial) metrics.