As far as I know, David Skok’s SaaS Metrics 2.0 has been the bible for SaaS entrepreneurs and start-ups when it comes to metrics management. It really is an excellent guide to the SaaS business model and its uniqueness. In addition, since there are a bunch of articles on the web explaining SaaS business and metrics, you can easily find good fundamental guides.

However, if you want to run a profitable SaaS ex. Micro SaaS, there are a few caveats when you understand the metrics and business given the business nature difference I wrote about in the previous article; How Micro SaaS is different from VC-backed SaaS.

David Skok’s guides in SaaS Metrics 2.0 basically emphasise the profitability increase through customer lifetime. When we take a single customer, indeed, the profitability in the acquisition period when the business acquires the customer and in the running periods when the business serves them are totally different. The loss in the acquisition period can be offset by the profits gained through the running period. In fact, the profits from the running period can be way bigger than the initial loss if the business keeps retaining the customer. Thus, as long as the business acquires and retains customers, bearing a sizable loss is fine. This is the Large SaaS way of thinking. However, Micro SaaS shouldn’t think that way. The Large SaaS thinking above works only when the business has a plentiful amount of capital. Micro SaaS businesses are merely well funded and should find their best balance between the loss from investments and the profits from recurring revenue based on their resources.

With the thought above, I listed the key financial metrics you should monitor when running a Micro SaaS. 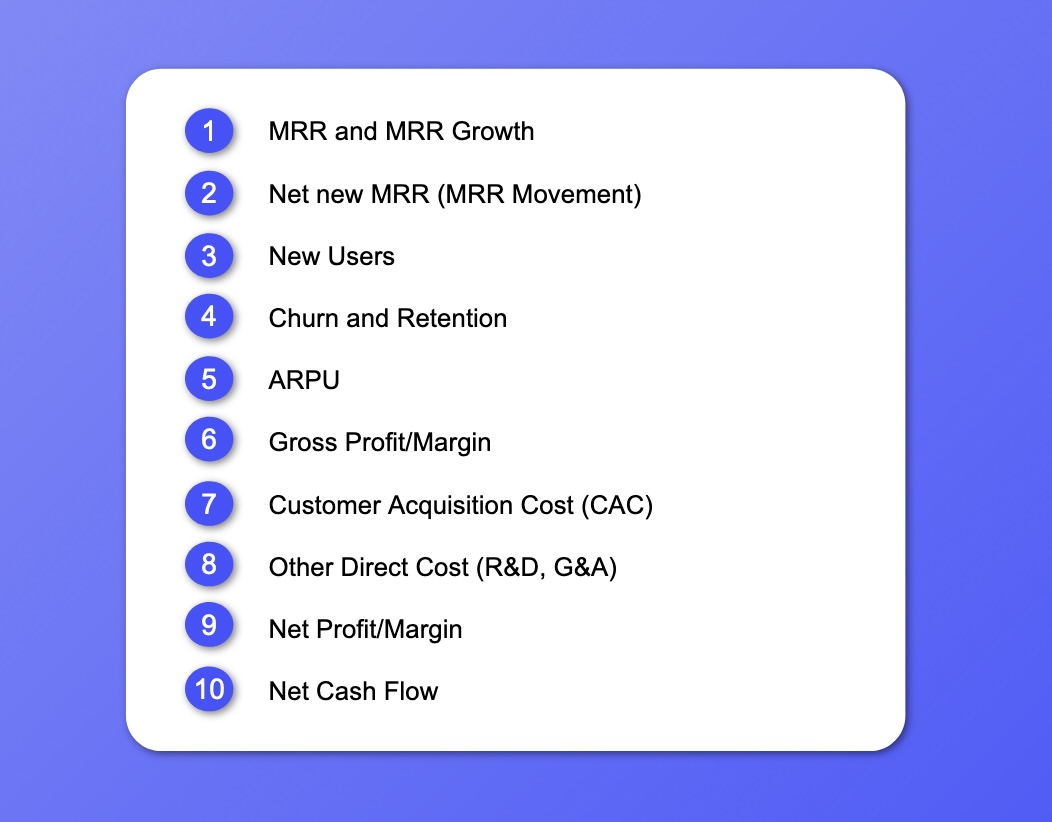 I don’t think more needs to be explained about MRR and its growth. Since this is the output metric, you understand and analyse other topline metrics such as New Users, MRR Movement, etc. to drive this metric.

MRR can be changed by many events. In my model, the changes are measured by 5 categories. However, Reactivation MRR doesn’t matter a lot in most cases.

Those are the exclusive 5 categories to understand MRR movements. Since Reactivation MRR is relatively small in many SaaS and it’s important to know if the net of Expansion and Contraction is positive or negative, New User MRR, Churn MRR, and Net Expansion MRR (Expansion MRR - Contraction MRR) are the key buckets you should understand well.

User acquisition is one of the core growth drivers for every SaaS. The number of new users in a day, week, and month should be monitored tightly. In addition, you should manage the marketing/sales funnel i.e. leads, signups, white paper downloads, opportunities, conversion rates, etc. Personally, I recommend that you should manage the funnel separately as it can vary among SaaS businesses and it should be another detailed model which is inappropriate to incorporate into the financial model.

As you know, retaining users is one of the most critical things for subscription businesses.

You should track and manage not only User Churn, which is calculated based on the number of users, but also Revenue Churn and Net Revenue Retention, which are measured based on MRR amount changes in existing users.

The formula is as follows if you measure monthly numbers.‍

ARPU is the abbreviation for Average Revenue Per User, which shows the average size of your user in revenue. If you sell only one single plan, this is not worthwhile tracking. Otherwise, please keep in mind that it’s useful to track New User ARPU and Chun User ARPU in addition to Total User ARPU to know if you are acquiring/churning big or small users.

SaaS is a high gross margin business and that is the strength of the business model. Many experts and investors say > 80% gross margin is ideal and < 60% is bad. I think you should re-consider the operation model if your gross margin is way less than 60%, too.

By the way, Gross Profit is the number remaining when you deduct payment fees, server costs, customer support costs, and other costs related to serving your paid customers from MRR.

Usually, CAC is not that important for Micro SaaS as they don’t spend a significant amount of money in acquiring customers compared to Large SaaS. If you spend sizable money on Sales and Marketing, you should measure and track CAC per new customer and CAC payback periods.

Assuming founders manage product development and general administration by themselves in most Micro SaaS, separately managing R&D and G&A costs is not prioritised. What’s important for Micro SaaS is to calculate acceptable cost budgets correctly every month so that monthly total costs come in under the budget.

Deducting CAC and Other Direct Cost from MRR, you get the Net Profit. In the very early phase, you would likely bear a Net Loss and not generate a Net Profit. You should simulate carefully and know how many months to go until a break even.